Recently I was writing the following code:

Another piece of code that might look familiar to the habituated pandas user is:

Typing this kind of stuff is annoying, and it triggers me every time I write something like this. Ideally, this would look more like:

which is not supported by the python syntax. What can be done, however, is the following:

In this post, I'll walk you through the code that makes the upper statement possible. For the sake of clearness I will present some code pieces out of context. If you want to see them in context, you can download the code.

Since the Select-part is easier, let's focus on it first. The grammar looks like this:

name is a column name, and alias can be chosen freely. So lets see how we can parse such an expression.

First, in the __init__() method, the string is split at the commas, and the remaining parts should be either a column name or a substitution like "kappa as value". These strings are mapped through the _to_var() method. Var is a namedtuple that just stores the name and a possible substitution, which has a default value of None, so it can be created by Var(name, substitution) or just Var(name). Splitting "kappa as value" at " as " results in ["kappa", "value"] and splitting "kappa" at " as " results in ["kappa"]. The resulting list can, in any case, be used as arguments for Var using the asterisk. So for the string: "subscript, kappa as value" self.vars will be [Var("subscript"), Var("kappa", "value")]. In order to be able to use Select(expression)(dataframe) the object needs a __call__ method. Completed it looks like this:

in the __call__ method we use the Var.name attribute of all stored vars to select the columns from the DataFrame that is passed as parameter, and then rename those columns, for which we have an alias.

The Where statement will work in a similar fashion, and we add a Where method to be able to do something like Select(expr).Where(filter_expr)(dataframe)

It simply creates a Where filter object and returns a function that applies the filter and then passes the results to its own __call__ method.

So lets look at the Where class, which is way more exciting. The Where object must take a string like "col1 > 5 and col2 == 'value'" and filter a DataFrame accordingly. We could try fiddling around with string splits, but handling all possible operators for all the possible data types will be hard. Python can already handle this kind of strings, there are functions like eval and exec. But we need to change the interpretation of the expression slightly. We want to change the and to a & and the or to a |, also we need to change col1 to my_frame.col1. This can be done using abstract syntax trees (AST).

But what is an AST? The easiest method to explain is an example. The following AST belongs to the expression: "col1 > 5 and col2 == 'value'": 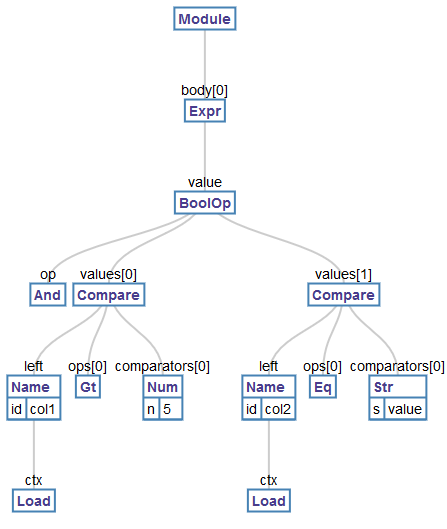 (BTW: this image was created using the Python AST Visualizer)

This looks scary on first sight, but it's really not that bad. Forget about the Module and the Expr nodes, those don't matter here. It starts to get interesting at the BoolOp node. This node represents the complete (boolean) expression above. At the upmost level it consists of an and statement, which has two values, both of which are comparisons (the Compare nodes). The left comparison has the operation "greater than" encoded as Gt, the left value is "col1" which is a node of type Name with the id "col1" and the context (ctx) Load (possible contexts are Load, when a variable is accessed, Store, when a value is assigned, and Del, when it's deleted). "Col1" is compared to 5, which is the first comparator. If we had used something like "1 < col1 < 10" the left value would be one, and there would be two comparators, "col1" and 10. The other compare node works the same. We will now manipulate the tree, and replace the BoolOp with BinOps. A BoolOp can have multiple values that are compared, a BinOp can only compare two values. Therefore it is necessary to replace the single BoolOp with nested BinOps like this:

The other thing we need to change is to transform "col1" to "dataframe.col1". For this, we need to exchange the Name nodes with an Attribute node, which is used to get an attribute from an object. To do this we need to know the name of the object that has the attribute in the scope in which the tree is evaluated. That is easy though. It is the name of the parameter of Where.__call__. So let's look at the necessary code. First we need to create an AST based on an expression

ast.parse will create the tree from a string. Then the tree will rewritten. The "df" is the name, that the DataFrame will have in the evaluation context. Then the result is wrapped into an Expression which is necessary to be able to use it in combination with eval instead of exec. Subsequently we call ast.fix_missing_locations(). This is because we will have inserted new nodes that didn't exist in the original tree. Every node needs to have a line and a column referenced to be able to know from which place in the source code it originated. Our newly created nodes won't have valid values for these attributes, and ast.fix_missing_locations() will fill them in for us. Then we call compile on the tree. Additionally we pass the information, that we want to evaluate the expression instead of executing it (which basically means that we want a value back), and a filename from which the tree was generated. Since we don't have a file, we simply pass "\<ast>" it could be anything though. We then store away the compiled expression for later use.

So let's see how we can actually rewrite this tree. To do this we need a visitor class. This class must have one method for every node type we want to manipulate, in our case Name and BoolOp. The methods must be named "visit_

The visit_Name() method is straight forward: it returns an ast.Attribute with a new value, which is the DataFrame, that will be passed to Where.__call__, and the attribute (attr) will be the id of the Name node, e.g. "col1". Additionally we use ast.copy_location to copy the location information from the old node to the new one.

The next method, visit_BoolOp() is a little more complex. Since the node has children, that won't be visited when we replace it, we have to call self.generic_visit() on it first. self.generic_visit() is inherited from ast.NodeTransformer. Then we find the type for the new BinOp via Select.TreeRewriter._bool_op_replacement_type(), which is defined as follows:

and then create the nested BinOps with self._nested_bin_op() from the replacement type and the values of the provided BoolOp.

Now, all that is missing is the application of the compiled tree which happens in the Where.__call__() method:

Again, you can download the complete code here. Also if you want to find out more about the AST, or use it in your own projects, I recommend this tutorial.

Using the code presented here is slightly slower than using pandas directly. So I would not recommend to use a Select or a Where inside a loop that is repeated thousands or millions of times.